If Tracee Ellis Ross and Dakota Johnson could invite me along on their next carpool karaoke, that’d be fantastic. I’m waiting by the phone, ladies.

Although I’m more than satisfied with my life as a freelance reviewer, I can’t help but think about the type of career I’d have in another life. Sometimes I think I would have liked to be a doctor because it’d be so incredible to have all that knowledge and be able to save people. Other times, I think being a hairdresser and chit-chatting with clients as you give them a new ‘do would have been fun. I also thought a career in music, whether it was in the spotlight or behind the scenes, would be the coolest thing ever. Those thoughts were confirmed after watching The High Note (2020). I may just need to get a side hustle in the music industry. Does anyone know if Beyoncé needs an intern?

My interest in the music world aside, I was excited to see this movie because it’s directed by Nisha Ganatra who also directed one of last year’s best movies, Late Night (2019). By the way, check out my review for that movie, here. In my opinion, Ganatra is quickly making a name for herself as the filmmaker to go to if you want to make an indie-ish movie based on an original idea. Also go to her if you’re a fabulous leading lady who wants to flex her acting muscles and do something outside your comfort zone. For me, Ganatra is like the Nancy Meyers of movies about the entertainment industry. I want to live in a a Nancy Meyers house, and I want to to work in a Nisha Ganatra workplace.

The way Ganatra captures the slick, cool, fast-paced world of the music industry, and Los Angeles in general, is gorgeous to watch. Her directing style is somehow engaging and comforting at the same time. The movie’s opening is an incredibly modern montage that within the first three minutes, perfectly establishes what the movie’s about, exactly who the characters are and what they’re working for. The camerawork and cinematography in The High Note are stunning. It bathes L.A. in this mellow tone, making it look like the coolest, most interesting place in the world. Or an entirely different world for that matter! The High Note is a treat for the eyes, as well as the ears.

The music in The High Note is sensational. A mesmerizing mix of past hits and standout originals, every song featured in the movie is a delight to listen to. It’s intoxicatingly fun and unlike anything you hear on the radio. Watching The High Note is like getting a lesson in music history. The characters discuss everyone from Sam Cooke, to Joni Mitchell, to Aretha Franklin (to name a few) with such enthusiasm and reverence that there’s no way you’ll be able to resist going through the discography of every artist mentioned. I know I am.

No one is more quick with a musical fact in this movie than Maggie. It’s pretty much 80 per cent of her character. You learn so much about music history just from her throwaway lines! While in real life music know-it-alls can come off as pretentious posers, Dakota Johnson never comes off that way as Maggie. Her performance is thoroughly earnest and you can tell she’s someone who’s just genuinely in love with the art of music. Johnson is a lot of fun in this role and it really gives her a chance to show off her range. I like how she’s kind of Kristen Stewart-ed her career: She made a ton of money and a name for herself in a shitty franchise, and then went on to prove she’s a great actor by taking exciting, interesting roles. I really like her and would love to grab a drink with her.

I’d also love to grab a drink with the fantastic Tracee Ellis Ross. I think Ross is a terrific actress. At first I wondered, “why would they approach someone who isn’t known as a singer to play this famous musician?” It took all of two seconds for Ross to show exactly why she was cast. As Grace, she perfectly embodies a legendary diva. The way she speaks, the way she carries herself, her subtle facial reactions all seem to say, “I know who I am, what I’ve done, and what I want.” Ross gives such an effortless performance and I can honestly say that she disappeared into the role. I completely believed that she was a famous singer who had been living as such for years. Then again, when your mother is the legendary Diana Ross, I suppose you kind of have.

I loved watching Ross and Johnson play together and if I could change one thing about the dynamic between their characters, I’d give them more screen time as friends. There are some great scenes where Grace and Maggie share heart to hearts and learn from each other, and I would have loved if the movie had included more scenes like that. Thankfully each have other friends and family members to share the screen with, and supporting actors Zoë Chao, June Diane Raphael, Bill Pullman, Ice Cube, and Kelvin Harrison Jr. are wonderful additions. Sidenote, please Hollywood: Give Harrison Jr. a recording contract because I could listen to his velvety smooth voice ALL DAY.

I really enjoyed The High Note for all its similarities to Late Night, as well as all its differences. It excels in acting, music and direction, but there was just one aspect of the script that kept bugging me. One of Maggie’s ambitions is to help Grace produce new music, a storyline I thought was going to be a majority of the plot. Ross and Johnson have such a great back and forth, I was excited to spend a lot of time watching them create music together. In an hour and 53 minute movie, it took until about an hour and five minutes in for Grace to even decide to record a new album. Really, the movie’s halfway point is where I wanted it to begin. I wanted to spend the whole two hours watching them constantly together, and the movie unfortunately keeps them apart for more time than I would have liked. It’s a small complaint, and thankfully it doesn’t distract from the The High Note’s overall charm. 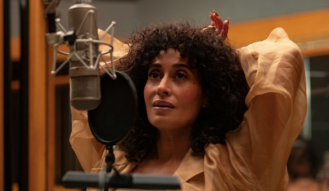 The High Note is aptly named. It hits high notes, higher notes, and holy fuck notes. It’s a  remarkable romantic-comedy that’ll have you searching for your own side hustle in the music industry. I’d recommend this one to anyone who’s a lover of great directing, great actresses, and great music. Can this please become a broadway musical so I can experience its excellence in person? Oh! Or a touring live show! Hey, if Glee (2009 – 2015) can do it, so can The High Note.

Have you seen The High Note? What did you think?