Unashamedly I must admit that growing up, I knew Eddie Murphy mostly from his family-friendly movies like Shrek (2001), Daddy Day Care (2003) and The Haunted Mansion (2003). Sidenote, I watched The Haunted Mansion the other night and sure, the story is pretty basic, but it’s full of spooky visuals and themes that will always give a movie my seal of approval. Actual adults, I’m sure, best know Murphy from his roles in iconic movies like Trading Places (1983), Beverly Hills Cop (1984), and of course, Coming to America (1988). This was my first time seeing the classic comedy and I’m thrilled to say, I loved it. I mean, Murphy in an 80s movie that he wrote the story for and happens to be directed by John Landis? This is comedy gold!

Coming to America follows Akeem Joffer, crown prince of the fictional African country of Zamunda. Accompanied by his aide, Semmi, Akeem leaves his pampered lifestyle behind and travels to America for the first time. Specifically, to Queens, New York City. There he searches for a woman who will love him for his true self, not his royal lineage.

Within the first five minutes the movie had me hooked. I mean, AkeeM being woken in the morning by a band of trumpeters? Having a group of servants lay rose petals down wherever he steps? Having personal bathers? Let me tell you, I cackled when they called for the royal butt wipers. What a ridiculously over the top (but also kind of ideal) way to start the day! That ridiculousness over-the-topness is in everything from the characters, to the production design, to the costumes, and it’s a large part of what makes Coming to America such a fun movie. Is anything the royal family does even slightly realistic? Absolutely not. But did I laugh out loud at the overall absurdity and fabulousness of their lives? Absolutely! I DIED at their radio conversation across a 25-foot long breakfast table and almost wet my pants when I heard the line, “I tied my own shoes once. Believe me, it was an overrated experience.” This movie’s script is killer. Of course, anything spoken in the velvety smooth voice of the magnificent James Earl Jones is going to be music to my ears.

Subtle, smart, and hilarious, the humour in Coming to America really made me feel like I was watching a Mel Brooks movie. Which makes sense because I feel like Landis is in the same vein as Brooks in the sense that he makes beloved, irreverent comedies that are simple in story but memorable in execution. It’s honestly been a while since I’ve seen a comedy for the first time that’s made me laugh like this movie did. Oh my god, when Akeem warns a potential robber (played by a young Samuel L. Jackson), “I’ll be forced to thrash you,” I died. Coming to America is brimming with unforgettable lines that are endlessly quotable.

The visual jokes fly a mile a minute and the script is just as slick, but you know what one of my favourite parts of Coming to America is? The inclusion of one of my favourite movie tropes of all-time: the bad date montage. And this one is GREAT! Silly, bizarre and wonderfully wacky, this is a top-tier montage that’s also a great representation of this fish out of water story. Also, it features Arsenio Hall in terrible drag which I am 100 per cent here for. Because yes to drag. Always.

For me, this is a new side to Eddie Murphy. Yes, he’s delivered dramatic performances in movies like Dreamgirls (2006) and Dolemite Is My Name (2019), but again, I’m mostly familiar with his kid-friendly shtick. As Prince Akeem, Murphy plays a convincing romantic lead who is effortlessly funny and genuinely charming which is a new and welcome experience for me. Murphy owns this role. I completely believe him as this naive foreign prince who is lovably earnest in wanting to fit in and embrace American culture. Every honest misunderstanding and innocent attempt to be a regular person is gleeful to watch. Again, I laughed out loud at lines like, “what does ‘dumb fuck’ mean?” Like the bad date montage, the fish out of water experience is a trope I’ll never tire of.

What I did tire of though, were Murphy and Hall’s use of prosthetic makeup to play multiple roles. I know it’s one of Murphy’s tricks of the trade (in fact, I think this is the movie that started the trend for him) but it’s something that I’m never really a fan of. The problem is, none of the secondary characters they play are as interesting or fun as Akeem and Semmi. Often it feels like the story halts so one of them can fill five minutes of movie with an unimpressive character. Murphy and Hall are easily the best parts of Coming to America, but I don’t need even more of them in the form of unnecessary characters. 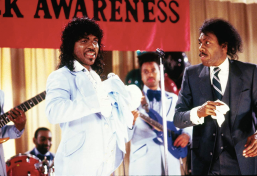 The romance in Coming to America is just as joyful and well done as the comedy. Sure, there probably could have been more swoon-worthy moments but A) that’s not what the movie was going for and B) what we got was still pretty enjoyable.

Murphy and Shari Headley, who plays Akeem’s love interest Lisa McDowell, share a lovely chemistry that beautifully nails the importance of getting to know someone for their personality rather than their social standing. Sweet and tender, their relationship progresses in the classically entertaining rom-com way. There’s friendship, there’s embarrassment, there’s heroism, there’s a moonlit walk and there’s even an obnoxious 80s boyfriend that gets put in his place! I’ve said it before and I’ll say it again: Rom-coms may be formulaic but damn, do I enjoy watching those formulas unfold every time. 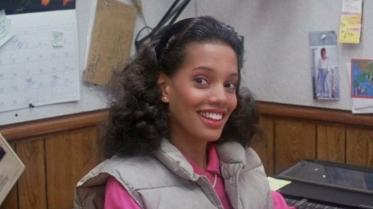 With just one viewing, I think Coming to America has solidified itself as my new favourite Eddie Murphy movie. Although, I don’t know. Shrek and The Haunted Mansion are still winners in my book. While the idea of the upcoming sequel leaves me uneasy (because a sequel 30 years after an already pretty dated movie rarely works out), I can say with certainty that I will definitely be re-watching Coming to America in the future. If for no other reason than to laugh at Murphy when his character says he just turned 21. Oh, Eddie…you weren’t fooling anyone.

Are you a fan of Coming to America? Are you excited about the sequel?