Michaela Watkins is so underrated, it’s not even funny.

Can we all agree that the best part of any trip to the movies is seeing all the new trailers? Sure, most trailers premiere online these days, but there’s still something exhilarating about experiencing a mind-blowingly awesome trailer for the first time on the big screen. For me, it’s almost like an adrenaline rush. Ugh, and I LIVE for that moment where you turn to your friend and excitedly say, “oh, we’re definitely going to see that!” Practically nobody saw In a World… (2013) however, which is a shame. The plot occasionally loses focus, but that doesn’t stop it from being a scrappy little movie that gives Lake Bell the spotlight she rightfully deserves.

Starring, co-produced, written, and directed by Bell, In a World… follows Carol Solomon, a vocal coach who dreams of doing voice-over work for movie trailers. When she gets the opportunity to be the trailer voice for a highly-anticipated movie franchise, Carol soon finds herself competing for the sought-after job against industry heavyweights. One of which is her own father.

Y’know what’s funny? It may only be seven years old, but the entire premise of In a World… is already dated. Movie trailers don’t have voice-overs anymore, have you noticed? I think it’s because so many movies these days are based on existing property that a voice explaining what the story is about is unnecessary. Nowadays all trailers need are recognizable imagery from the work they’re adapting / remaking / making a sequel to, text that’s just iconic lines or catchphrases, and an acoustic cover of a pop song. And because we’re already heavily familiar with all of that, that’s all that’s needed. It’s a little lazy to be honest. Anyway, that’s enough of my diatribe against modern movie trailers. Let’s talk about In a World….

I’ve always admired movies that explore lesser-known jobs, especially ones in the movie industry. That intrigue is partly what led me to this movie. However, while the movie sheds some light on the world of voice-over work, In a World… surprisingly devotes more time to anything but. About 30 minutes into the 90 minute runtime, a lot of interesting information and characters are introduced, but there’s no real semblance of a plot. Carol’s work as a vocal coach is alluded to but never takes centre stage, with more importance placed on her sister Dani’s crumbling marriage. Don’t get me wrong, the crumbling marriage storyline is phenomenally well-done, but I just would have preferred a more in-depth look at the world of voice-over. Carol’s quest to booking the voice-over big job may be the movie’s central plot, but often gets overlooked and brushed aside. The movie hardly gives it any attention until the final 30 minutes.

As much as I would have liked to see more actual voice-over work, the failing marriage between Dani and her husband Moe was fantastic to watch. Michaela Watkins and Rob Corddry deliver grounded, haunting, snarky performances that feel like something out of an Oscar-nominated drama rather than an indie dramedy. I was so thoroughly invested in every facet of their relationship. Even when they weren’t onscreen, I wished to see more of them. I’m constantly impressed by Watkins. Just like in Brittany Runs a Marathon (2019) – check out my review, here – she takes a side character and endows her with so much passion, intrigue, and unbridled charisma, that she easily could have been the main character herself. She’s a sensational actress.

As is Bell. Whip-smart, hilarious, and possessing a personality that you can’t help but be drawn in by, I love when Bell pops up in things. Sidenote, I’m living for her as Poison Ivy on Harley Quinn (2019 – present). Bell’s delivery is rapid-fire. She’s so quick with a joke or a sassy monologue, transforming even the simplest of lines into a mesmerizing spectacle. Bell plays Carol with an endearing blend of silliness, ambition, charm, and “no fucks given” nerves of steel. It’s a role that couldn’t be more perfect for her. Clearly she knows how to write to her strengths, a quality that not all writer / director / actors know how to pull off. Sidenote, as long as Bell is churning out terrific screenplays and entertaining characters, can she PLEASE write something in which she and Kathryn Hahn play sisters? I feel like that absolutely needs to happen. 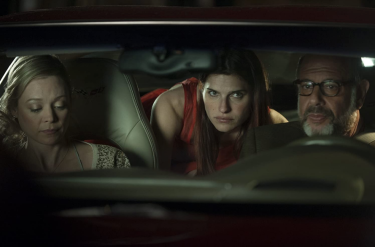 Bell also succeeds tremendously as a director and writer. Except for the aforementioned lack of attention given to Carol’s work and talent. Seriously, if this movie just threw in a montage or two, I would have been placated. In a World… is well-shot and has decent pacing, really allowing you to sink into the story it’s telling and become fully engrossed in the world Bell builds. I could totally see this working as a mini-series for Netflix or FX. The storylines are so engaging and full of potential, that I’d happily watch them stretched out over the course of a six or eight episode series. It’s unique, appealing, features fun characters, and manages to convey an empowering message about the power of a woman’s voice. I wont spoil anything, but the ending is so satisfying that it had me defiantly saying, “fuck yes! Get it ladies!”

Going in I was expecting to really end up loving In a World…, so I’m just a tad disappointed that I only greatly enjoyed it. It’s wonderfully written, directed, and acted, but for me…what can I say? I was bummed that it didn’t feature more actual voice-over work. Thankfully, the fabulous performances from this brilliantly-talented cast are enough to not only make me want to watch this movie again, but recommend it to anyone who can’t resist a biting indie dramedy. At the very least, pay homage to the movie’s subject matter and check out the trailer for In a World….

Have you seen In a World…?