My biggest takeaway was that you shouldn’t get married until you’ve finished school and have a stable income.

As I was scrolling through Twitter, one headline for a review of the new Netflix original movie Dangerous Lies (2020), caught my eye. It went something along the lines of, “It’s the Cheaper Version of Knives Out (2019).” Now, as my review, which you can check out here, will attest, I LOVED Knives Out. So, the idea of anything even slightly resembling that movie, even if it weren’t exactly at the same level, had me both curious and excited to watch it. But you guys, Dangerous Lies isn’t just the cheaper version of Knives Out. It’s the version that’s falling apart at the seams, hopelessly out of style, and has been sitting at the bottom of the bargain bin for years. That’s the level of quality we’re dealing with.

Dangerous Lies follows Katie and Adam, a young married couple who are struggling financially. When Leonard, the rich elderly man Katie cares for suddenly dies, he surprisingly leaves everything he owns to her. Including his enormous house which comes with secrets of its own. Soon Katie finds herself wrapped in a mystery that has her questioning what’s real, and what’s too good to be true.

Maybe it’s because I’ve been watching so many Netflix originals lately (the majority of which feel like made-for-TV movies), but the entire time I was watching Dangerous Lies I kept thinking to myself, “this movie doesn’t feel real.” It feels like a mediocre student film that somehow got funded by the most popular streaming site. One of the biggest problems with Dangerous Lies is its bonkers pace. If you’re 30 minutes into a 90 minute thriller and nothing slightly intriguing or thrilling has happened, you’ve fucked up. The movie takes its sweet-ass time setting up its boring story, wasting time by finding five different ways to get the same point across. We get it. Katie and Adam are broke and desperate. We understood that in the beginning. You don’t need to remind us 45 minutes in! Really, at 45 minutes in when they find out that Leonard left them the house, THAT should have been the beginning of the movie. The entirety of Dangerous Lies feels like a first act, proving that the filmmakers don’t really understand pacing. Or, for that matter, what a thriller is.

Dangerous Lies works in broad strokes. Like, screenwriter David Golden had clearly seen a handful of thrillers and just decided to throw in whatever he thought would be interesting: A mysterious death, a missing fortune, a sprawling mansion…the movie throws everything at the wall and hopes that something will stick. It keeps going, “ahhh, now isn’t THAT a twist?! Aren’t you under suspense and intrigued?” And the answer is, no, we never are. The problem is, nothing about Dangerous Lies is particularly original, unique, or smart. It’s unnecessarily convoluted. It can’t figure out how to tell one mystery successfully so it chooses to tell several poorly. Which only comes off as a huge failure. I was so bored you guys. This movie was incapable of holding my attention. Towards the end it got to the point where I literally didn’t care who did what to whom. Oh, someone has stolen something from somewhere sometime ago and it affects someone else somehow? Ok…does anyone care? I certainly did not.

Speaking of things I didn’t care about, Katie and Adam are pretty stale protagonists. Played by Camila Mendes and Jessie T. Usher respectively, these two have zero romantic chemistry. I’m not one to skip ahead during movies I’m watching for the first time, but no lie, I literally skipped over their 30 second sex scene because I was so bored watching them. I also wanted the movie to be over quicker but that’s besides the point.

The acting is pretty terrible. Mendes’s dramatic acting style is reminiscent of the most committed girl in your high school drama class. But seriously though, WAS this actually someone’s student film? Usher is quite lacklustre as well. In fact, his character didn’t even need to really be in the movie at all. If Mendes had been charged with headlining this movie by herself, there’s a chance that she could have risen to the occasion and really delivered a captivating performance. Unfortunately, that isn’t the case and Mendes gets bogged down by side characters, scenery-chewing, and a truly staggering amount of exposition. 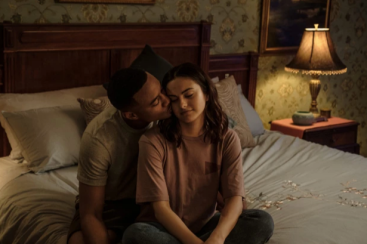 To be fair, I zoned out for a good chunk of this movie, especially towards the anti-climactic end, but honestly, there weren’t even that many lies. Seriously, maybe I missed something, but there wasn’t so much lying going on as there were characters simply stumbling across information told to them by other characters. Really, the only dangerous lie I can glean from this movie is if someone tries to argue that it’s worth watching.

Have you seen Dangerous Lies? Are you tired of watching Netflix originals?