This is one coffee break you’re gonna wanna pass on.

In a time when major studios are either delaying or flat-out cancelling the release of seemingly every major blockbuster, I’ve never been more thankful for Netflix. Seeing as nothing new is being released in theatres (and they’re closed, anyway), I’m thankful that the streamer is still releasing new movies for me to review. Well, thankful-ish. I’d be much more thankful if Netflix would put out better movies than the “action-comedy,” Coffee & Kareem (2020). You guys…after suffering through this truly terrible movie, never have I missed theatrical releases more.

Coffee & Kareem follows James Coffee, a Detroit police officer who is at odds with Kareem, the 12-year-old son of Vanessa, the woman he’s dating. When Kareem witnesses a murder, Coffee must protect both him and Vanessa from gangsters who want them dead.

So, at first I was like, “oh, I am HERE for this stupid pun title! I’m sure this movie will be silly and fun!” Oh my God…I could not have been more wrong. You guys, in every way imaginable, Coffee & Kareem is just the worst. I was only three minutes in before I instantly regretted having chosen to watch this movie. I mean, my options were pretty limited, but I literally cringed at knowing that I had to sit through an hour and 20 minutes of truly, one of the worst buddy-cop movies I’ve ever seen.

On paper, the idea of a cop teaming up with a preteen sounds like it could be a hoot, but in reality, you get a movie that is throughly unmemorable, extremely bland, and tonally confused. Coffee & Kareem has such a weird tone. The premise is marketed towards children (and the acting is pretty childlike as well), but the humour and jokes are all clearly meant for adults. Sidenote, if you’re looking for a movie that effortlessly blends child stars and raunchy adult humour, just watch Good Boys (2019). It’s much funnier, much smarter, better acted, and is everything Coffee & Kareem wishes it could be. Check out my review, here. The inconsistent tone is jarring, confusing, and honestly, just stupid. And not even enjoyably stupid. Like, one of Coffee’s comebacks to a woman who’s frustrated with him for doing his job horribly is, “I’m sorry your vagina is so small.” Sigh…think of the most basic, boring, idiotic jokes imaginable, and you can bet your butt that Coffee & Kareem uses them.

This movie feels like it was written in 2004 or 2009. Then everyone forgot about it, dusted it off 10 years later, and then just stuffed in a handful of 2019 slang words and trends. What I’m trying to say is, this movie should’t even exist. It has literally nothing to offer to any audience. Truly. Women, Black people, gay people…it’s really an accomplishment how Coffee & Kareem can be so insultingly terrible to such a wide range of audiences. Demeaning, gross, and really, just a horribly made movie, I can’t think of a single demographic that would find anything remotely redeeming or enjoyable about this movie.

Well, perhaps I spoke too soon. There are two rays of light in this storm cloud of a movie, albeit, they’re microscopically small. One is Betty Gilpin as Coffee’s colleague, Linda. Gilpin is always a ton of fun! Her jokes are the only ones that actually land. Gilpin’s delivery is so on-point and handled with such talent and expert comedic timing, that really, she outshines Ed Helms and Terrence Little Gardenhigh, who star as Coffee and Kareem, respectively. You know who else outshines the movie’s stars? RonReaco Lee and Andrew Bachelor as Orlando and Rodney, the movie’s antagonists. The duo are fairly funny as bumbling criminals and if the whole movie had been about the pair trying and failing to pull off crimes, Coffee & Kareem would actually be pretty decent. Maybe even good. Seriously, everyone but the leads supply Coffee & Kareem with the movie’s few laughs. 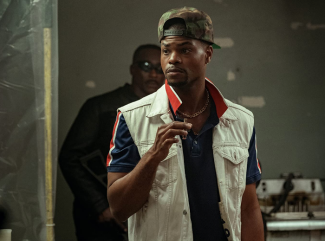 Being stuck with Helms and Gardenhigh, and their lack of chemistry or jokes, is a chore. In terms of saving the movie, the pair have nothing to offer and as a result, I sincerely wanted to turn this piece of garbage off multiple times. I thought Helms was great on The Office (2005 – 2013), but I’ve never really enjoyed any of his movie roles. He’s not a very versatile actor and he ends up just playing dorky Andy Bernard in everything he does. Sidenote, I watched The Hangover (2009) recently for the first time in years, and I’m sad to report that it doesn’t hold up. Ugh, and this movie’s waste of Taraji P. Henson! She’s far too talented, funny, and amazing to play second fiddle to this cast of lacklustre leading actors.

Coffee & Kareem is one of those movies where I routinely zone out, check back in, and ask myself, “good Lord, is this movie still happening?” It fails to be even remotely engaging or fun. Really, there is nothing unique or interesting to make Coffee & Kareem worth the time to watch. If you’re looking for a great, modern, buddy-cop movie that’s just a blast of action and fun, I highly recommend; The Heat (2013), The Nice Guys (2016), or even Stuber (2019). By the way, check out my review for that movie, here. I know quarantine has us facing limited options for new movies to watch, but trust me: Go ahead and skip this serving of Coffee & Kareem.

Have you seen Coffee & Kareem?