In my review for Fighting with My Family (2019), which you can check out here, I mentioned that there are only a handful of sports movies that are so wonderfully executed, they have a sports non-enthusiast like me singing their praises: The Blind Side (2009), A League of Their Own (1992), Space Jam (1996) and Bend It Like Beckham (2002). Every one of these movies earns a spot on my all-time list of favourites but I have to admit, I hold a special place in my heart for Bend It Like Beckham. Is it because I watched the shit out of it growing up? Is it because it’s yet another English charmer? Is it because it was the perfect family movie in our house, offering just the right blend of romance, comedy, family drama and soccer? I may never know for certain but what I am certain of is how much I love this movie.

Bend It Like Beckham follows Jesminder “Jess” Bhamra, the 18-year-old daughter of Punjabi Sikhs living in Hounslow, London. Like her idol David Beckham, Jess dreams of playing soccer professionally, something her traditional parents are extremely against. When she gets the opportunity to play on her local soccer team, Jess struggles with pursuing her passion and accepting the life her parents have pre-planned for her.

Ever since I reviewed Blinded by the Light (2019), which you can check out here, I’ve had a craving to revisit Bend It Like Beckham. Both are co-written and directed by Gurinder Chadha who in my opinion, is severely underrated. Granted, she’s more well-known and appreciated in the UK but she’s so gifted as a filmmaker that I’d love for Chadha to get the opportunity to direct more Hollywood movies. Not big-budget blockbusters though. Chadha’s greatest strength is her ability to create stories while simple on the surface, actually touch on complex family issues that millions have dealt with themselves. At the same time, she’s a whiz at interweaving enough romance and comedy to keep audiences  entertained from start to finish. Full of wit and warmth, Chadha’s writing is enchanting. She envelops you in the delightfully charming, and occasionally quirky, world she’s created and the result is a family you’ll never want to stop watching. Chadha’s voice and style of storytelling is wholly original and something I think most movies these days are lacking. 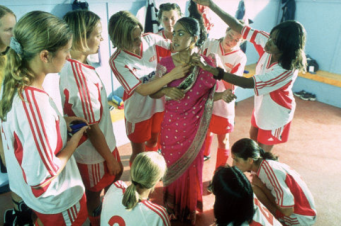 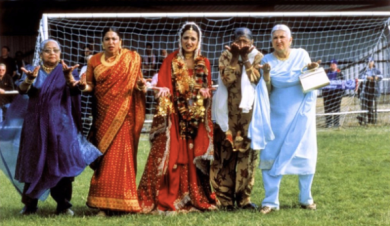 Speaking of what’s lacking from Hollywood, can we talk about Parminder Nagra? She’s had a steady career on television but film-wise nothing quite as big or significant as Bend It Like Beckham. That’s an honest shame because as Jess, Nadra is a heartwarming delight. She possesses a winning combination of innocence and determination that when coupled with Chadha’s insightful writing, make Jess a protagonist you can’t help but root for. Jess is strong and resilient, constantly working towards her goals no matter how out of reach they seem. A gifted actress, Nadra is able to do so much while doing so little. With just a look she’s able to convey how trapped she feels at family functions as well as how joyful she feels when she’s out on the soccer field. Much like Chadha, I’m totally down for Nadra to be in more Hollywood projects. As long as she’s contractually obligated to narrate her deepest feelings to a David Beckham posts because that’s just adorable. 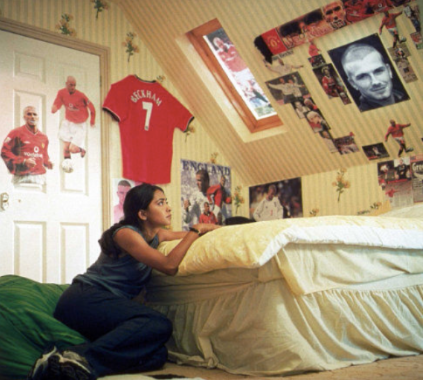 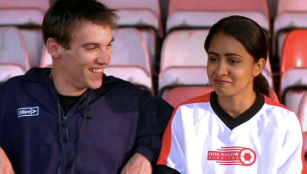 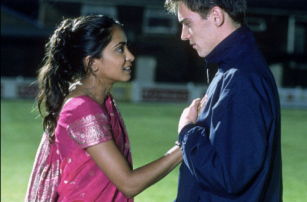 At its heart, Bend It Like Beckham is very much a movie about family. The difficulty to fit in while yearning to stand out…these are universal themes that anyone, no matter their background, can relate to. When you come from a big family, things like the pressure to follow the path laid out by your parents, the uncertainty of what to do after graduation and a horde of distant relatives asking when you’ll finally get engaged are hauntingly familiar. Bend It Like Beckham masterfully tackles all these issues in a smart and funny way, creating a coming-of-age story that crackles with personality. Look, I’m consistently in awe of and enjoy the scenes that actually include soccer, but the family drama and soul-searching are what I love most about this movie. Really, Chadha’s story speaks volumes to its viewers, perhaps one of its strongest assets.

Another of its great assets is the supporting cast. As love interest Joe and best friend Jules respectively, Jonathan Rhys Meyers and a ridiculously young Keira Knightley share a wonderful chemistry with Nadra. Their roles are pretty standard but they perform them with charisma to spare. However, the unsung heroes of Bend It Like Beckham are undoubtedly Jess and Jules’ wildly different mothers. Played by Shaheen Khan and Juliet Stevenson respectively, these two women are comedy gold. They steal the show. Stevenson is bubbly, paranoid and clueless, playing the type of entitled suburban wife who’s ridiculous misunderstandings will never cease to make you laugh. Khan is pure perfection. She plays the part of the overbearing Mrs. Bhamra so flawlessly that I’m convinced she’s not even an actress, just a real mom trying to understand her daughter! Low-key the star of the movie, her stern reprimanding of her daughter is hilarious and yet still able to pack an emotional punch. One of the great things about Bend It Like Beckham is that you’re able to see things clearly from each character’s point of view, no matter how twisted or in the wrong they are. It packs an emotional punch and the way that each character is able to grow over the course of the movie is only a testament to the talent involved. 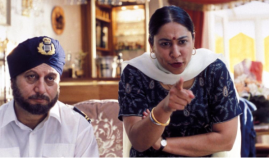 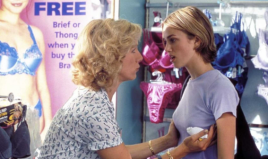 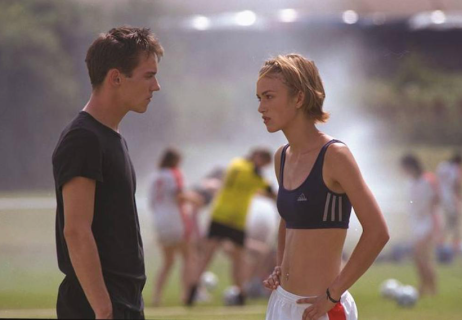 At one point I thought to myself, “huh. These are mostly exterior shots and a handful of interior sets. This movie couldn’t have cost very much, right?” Turns out, Bend It Like Beckham only cost $6 million to make. In my opinion, a low budget only strengthens a movie rather than hindering it. It forces the team to think more creatively about what they can or want to include in the movie, devoting more time to the story rather than padding runtime with flashy effects and tired bits. Maybe some of the budget went towards the cast being coached in soccer. I’m sure stunt doubles were used at some point, but for a lot of the shots you clearly see the actors actually playing the game. Oh! I’m confident a chunk of the budget went to the wedding scene which I have to say, money well spent. Indian weddings are absolutely stunning to witness and Bend It Like Beckham pulls its off beautifully. 10/10 I would be a guest at that wedding.

What’s the soccer equivalent of a touchdown? I tried Googling it and shockingly, came up empty-handed. Well, whatever it is, that’s the level of achievement Bend It Like Beckham reaches. A heartwarming story about standing out and standing strong, there’s no way you can resist re-watching this beloved comedy over and over again. Really, it’s worth a re-watch just to hear the line, “these mosquito bites will look like juicy juicy mangoes,” repeated in all of it’s hilarious glory. Don’t pretend like you don’t know which line I’m talking about. Finally, you know what I miss? Clips of behind the scenes shenanigans playing during the end credits! Please Hollywood, ditch the trend of mid-credits scenes and bring back clips of behind the scenes shenanigans!

Are you  fan of Bend It Like Beckham? What are you favourite sports movies?