We all deserve to meet the love of our life in a quaint seaside bookstore.

Would you believe that this is my 100th REVIEW? How exciting is that?! I just want you all to know how deeply thankful I am to have you as readers. Words can’t describe how much I appreciate you coming back and checking out my blog each week, liking my posts on Facebook, Instagram and Twitter, and for the overall love and support. Going to see these movies and then sharing my experience with you guys is so much fun and I hope that you get as much enjoyment out of reading the reviews as I do writing them. To celebrate this huge milestone I decided to review one of my favourite movies, Dan in Real Life (2007). Not only have I referenced it multiple times in other reviews, but it’s also an underrated gem that I feel more people should know about.

Dan in Real Life follows Dan Burns, a widowed newspaper advice columnist struggling to raise his three daughters. When Dan and the girls take a trip to his parents house to spend a long weekend with their extended family, Dan winds up meeting Marie, a fascinating and intelligent woman in a bookshop. Seeing a chance to open his heart up to love again, there’s just one thing holding Dan back from exploring his and Marie’s chemistry: She’s his brother’s new girlfriend.

I cant tell you how many times I’ve seen this movie. I never get tired of watching it. Honestly, any time a movie protagonist is a writer of any kind, you can bet your butt that there’s a high chance I become enamored with it. In fact, this is a movie that I admire so much and is so beautifully-made, that I often refer to it when I want to get some inspiration for my own creative work. Bursting with personality and charmingly-relatable dialogue, Dan in Real Life is a movie that I throw on when I’m in the mood for a heartwarming story. There are so many other reasons why I love this movie and trust and believe, we’ll get into them.

Directed and co-written by Peter Hedges, Dan in Real Life‘s central themes are of love and family, two topics Hedges is skilled at writing about. In Hedges’ recent work, the criminally-underrated Ben Is Back (2018) – which you can check out my review for here – he once again elaborates on those themes albeit in a darker tone. Seriously, Ben Is Back and Dan in Real Life could not be more tonally different, but they both revolve around the power of family and result in two gorgeous entries in the director’s short filmography. Another similarity between the two movies are their dry, witty comedy which Hedges brilliantly uses to cut the tension in his movies. It’s laugh out loud funny while also managing to be so damn relatable. To the playful teasing, to the annoyance of overprotective parents, to the unbridled joy of spending time together, Dan in Real Life captures the moments that define a family and shows them in a realistic and entertaining way. Try watching this movie and not going, “yep, that’s something my family would do.” 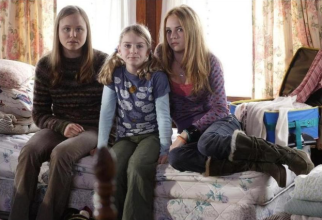 Can we talk about the Burns family for a second? What a cast! In the title role is Steve Carell who at this point in his career, was just dipping his toes into the dramatic side of acting. Sidenote, if you haven’t seen Little Miss Sunshine (2006), like, definitely go watch Little Miss Sunshine. Carell has always been immeasurably gifted at playing both comedic and dramatic roles and this romantic dramedy allows him to show off his incredible range. Carell will have you laughing, bawling and swooning as he portrays a man who feels all his emotions so passionately and is trying to come to grips with his new role as a single parent to three spirited young girls. From his initial cynical stance on romance to how quickly and hard he falls for Marie, Carell goes through an entire transformation and it’s beautiful in a subtle way. Oh and did I mention his parents are played by Dianne Wiest and John Mahoney? #GOALS.

As Marie, Juliette Binoche is enchanting. Her and Dan’s meet cute is exactly that, and from the second she appears onscreen you can just tell that her character is going to be something special. Bincohe crafts a character that you genuinely want to get to know over a cup of coffee. She’s someone who you can instantly identify with but at the same time is unexpected. Nailing both the comedic and romantic aspects of the movie, Bincohe is great on her own but at her best when paired with Carell. In some scenes their chemistry is so strong and they seem to be having such a good time that I think Carell is legitimately making her laugh and Hedges was just lucky enough to film it.

Is this maybe Dane Cook’s only good performance? I mean, I kind of like Employee of the Month (2006). Admittedly I haven’t seen it in a while so I have no idea whether or not it holds up. Anyway, it wasn’t until this viewing that I questioned why Cook was in this movie. Don’t get me wrong he’s perfectly fine in this subdued role, but it’s not like the character of Mitch gets any loud, brash comedic scenes, Cook’s MO in the early 2000s. Was he cast because he was kind of like the 2007 version of Chris Pratt? Funny, charming guy who Hollywood hoped would become a leading man? Well, it certainly worked for Pratt. Cook not so much. OH MY GOD, you know what current superstar IS in this movie though? Emily Fucking Blunt. Granted she’s only in the movie for like a total of three and a half minutes, but her star power is so bright that her presence makes an already great movie even better. Cheers to Emily Blunt.

The movie’s acting, writing and direction feel so true and organic that you can’t help but be swept away in the heart, humour and romance of the story. You really feel Dan’s despair at realizing he may have met his soulmate too late, his intense love for his daughters, and the touchingly intimate moments between him and Marie that feel right out of a classic rom-com. That bathroom scene? I live. The way their relationship progresses so quickly and intensely is just incredible to watch. From flirtatious strangers to secret longings to mutual heartbreak all in the course of a few days…This movie is just a master class in storytelling.

Dan in Real Life is so sweet, funny and well-crafted that it makes a strong case for my favourite Steve Carell movie. Although, there’s Get Smart (2008), Crazy, Stupid, Love (2011), Evan Almighty (2007), Foxcatcher (2014) and a host of others to consider. Hmm…well, at least I have my next 100 Waybacks planned out!

Have you seen Dan in Real Life?