It’s like a “Come to Europe!” ad…And my bags are packed.

In my review for Captain Marvel (2019) – which you can check out here – I explained how although I’m not the biggest fan of the Marvel Cinematic Universe, there’s no denying that they’re all objectively good movies that are well-made and lots of fun. As expected, the latest installment, Spider-Man: Far From Home (2019) proves itself to be filled with Marvel’s winning signature blend of charm, action and comedy. Somehow though, I left this movie without feeling much of an impact. In fact, I kind of forgot about it as soon as I left the theatre. Again, this was still an enjoyable movie, but I think my Marvel fatigue has finally reached its limit. I reiterate my plea from the Captain Marvel review: Marvel fans, please be gentle with me.

The sequel to Spider-Man: Homecoming (2017), Spider-Man: Far From Home follows Peter Parker as he travels to Europe with his high school science class. When elemental beings from another dimension wreak havoc across the continent,  Spider-Man is recruited by Nick Fury to save the day. He is joined by Mysterio, an inter-dimensional hero who serves as a new mentor of sorts to Peter.

Confession: I am one of the six people who have not seen Avengers: Endgame (2019). Initially I was worried that I wouldn’t understand what was going on at all in this movie, but thankfully Far From Home‘s opening scene is a crash course on the events of Endgame. I’m sure the other five people who missed out on Endgame were as relieved as I was. Surprisingly, the brief refresher is basically the only reference Far From Home makes to other MCU movies, making it a rarity of sorts. The Spider-Man movies almost feel like they exist outside of the shared universe because of how much time they devote to their main character rather than shoehorning in multiple side characters and acquaintances. With Far From Home, you get a straightforward adventure that spends half its time delivering wall-crawling, web-slinging action and the other half elaborating on the character of Peter Parker.

As the newest live-action Spidey, star Tom Holland is an absolute delight. In my millennial heart Tobey McGuire will always be Spider-Man because he’s the one I grew up with. There’s just no changing that. However, you’d be lying if you didn’t admit that Holland’s portrayal of the web-slinger is the truest to character we’ve seen yet. And we’ve seen a lot of Spider-Men over the years. Holland captures the pure innocent heroism of a teen superhero without ever feeling inauthentic. Holland’s Spider-Man is one who you genuinely want to see save the day because he embodies everything a hero should be: Selfless, brave and honest. Plus, Holland is just a real-life puppy dog. You can’t help but fall in love with how sweet and earnest he is.

Returning for the sequel is the multi-talented Zendaya as Michelle “MJ” Watson. I fucking love Zendaya. It’s almost unfair how one person can manage to be so entertaining, interesting and beautiful. She’s always great in everything she’s in and her charisma far exceeds her limited role as MJ. To be fair it’s a more prominent role than she had in Homecoming, but I’m still ready for her to take centre stage. As much as I love her as the witty and sardonic love interest, I’m more than ready for Zendaya to play her own hero. Maybe she can take a detour to the DC Extended Universe and play someone like Batgirl, Vixen or even Zatanna! If none of those names sound familiar, look them up. I promise they’re cool characters. Speaking of cool characters, keep your eye on sidekicks Ned and Betty. They’re dynamic is one of the cutest and funniest parts of a movie that’s already pretty darn cute and funny.

Making his MCU debut is Jake Gyllenhaal as Quentin Beck / Mysterio. I’m a big fan of Gyllenhaal’s and his casting is one of the major reasons why I was excited about seeing this movie. Knowing how phenomenal an actor Gyllenhaal is, I was admittedly a tad underwhelmed by his acting in the first act of the movie. I initially thought, “oh, he’s just phoning this one in and cashing that Marvel cheque.” However as things come to light in the second act, you get a better understanding of the motivation behind Mysterio and Gyllenhaal’s performance becomes all the more dastardly delicious to watch. Debonair, mesmerizing and possessing more star power than the sun, Gyllenhaal is an electric addition to the MCU and perhaps the best part of this movie.

For the most part, Spider-Man: Far From Home doesn’t stray far from the Marvel formula. Its pop culture referential humour, abundant use of special effects and thrilling action are all exactly what you’d come to expect from a Marvel movie, ensuring that Far From Home remains a predictably entertaining entry into the ultra-successful franchise. I struggle to find any hard-hitting criticism for this movie, positive or negative, because it’s so by-the-books, typical crowd-pleasing Marvel entertainment, that it almost shuts my brain off. Which isn’t necessarily a bad thing, it just doesn’t blow me away which is something I’m looking for in my superhero movies. Maybe that’s why I’m not more of a fan of these movies. They’re all just….copy and paste for me. Except for Black Panther (2018). That movie shook up the genre and is a major reason why I loved it. That and Angela Bassett because, duh. Once more I reiterate because I know how passionate the Marvel fanbase can get: This is not a bad movie. I did not dislike this movie. I just feel like I’ve seen it before.

While not as much of an original as Black Panther, I admire the Spider-Man movies because they get to show the fantastic world of superheroes from the perspective of a teen hero. It’s a different take than the rest of the movies which all feature more grown protagonists, and it really brings me back to days when I was a little kid watching cartoons like Teen Titans (2003 – 2006) or X-Men: Evolution (2000 – 2003). Spider-Man: Far From Home captures the joy and excitement that every superhero fan craves and brings it to life in a way that is sure to be loved by fans old and young alike. 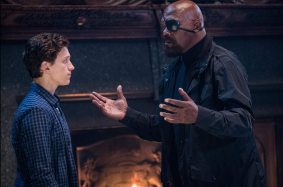 A safe bet for an enjoyable movie-outing that the whole family can find pleasure in, Spider-Man: Far From Home is another successful if not familiar entry in the long-running series of movies. Hey, I know what would shake things up a bit! What if Tobey McGuire played the ghost of Uncle Ben in the third movie? Worst idea ever or greatest cameo ever put to screen? We’ll have to wait to find out.

Have you seen Spider-Man: Far From Home yet? What did you think?