I really wanted to love it. But not even a genie could grant that wish.

I can’t tell you how long I debated going to see Aladdin (2019). As my review, which you can check out here, will tell you, Aladdin (1992) is my favourite movie of all-time. It’s an absolute perfect piece of filmmaking and when I heard that it was getting the live-action treatment, I’ll admit, I was apprehensive to say the least. I wrestled with whether or not I should bother seeing it based on how passionate my adoration for the original is. How could this remake possibly measure up to a movie I’ve seen dozens of times? Eventually I came to this conclusion: Even if it turned out to be the greatest movie of all time, there is no way I will ever find it more enjoyable than the original. There’s just no way it can compare. Turns out, I was right. Don’t get me wrong. Aladdin isn’t terrible and certainly has its charms, but it ultimately fails to replicate the magic of its animated predecessor.

Based on the Disney classic of the same name, Aladdin follows the titular hero, a kindhearted thief living on the streets of Agrabah who falls in love with the ambitious and beautiful Princess Jasmine. Though they share a connection, they come from different worlds and can’t be together. After discovering a magic lamp, Aladdin is befriended by an all-powerful genie who can change his life by granting him three wishes.

I always try to erase any expectations I have for a movie before going in to review it, but with Aladdin I REALLY had to clear my head. I didn’t want my love of the original to influence how I viewed the live-action remake. I would say that I succeeded. For the most part. I honestly enjoyed a majority of this movie and it’s not the movie’s fault that it lives in the shadow of one of the most cherished movies of my childhood. That’s the problem with all of these live-action remakes: No matter how well-made they are, they’ll never be as enjoyable or beloved as the work they’re based on. Aladdin is no exception. In all fairness, the movie starts on a high note. Will Smith’s rendition of the opening number, “Arabian Nights,” was a pleasant surprise that instantly calmed my nerves. Pair that with a sweeping shot of Agrabah and its exciting characters and you have an opening scene that is a worthy homage to the original movie. Throughout, the new Aladdin does a solid job of making callbacks and references to the original without copying things scene for scene or line for line. See The Hustle (2019)? That’s how you handle a remake. By the way, you can check out my review for The Hustle here.

Aladdin honours its predecessor while still managing to stand on its own two feet, something I wasn’t sure that director Guy Ritchie would be capable of pulling off. When Ritchie was first announced as director I admit my faith was shaken. I trusted him when it came to the action-adventure part of the story (which he didn’t disappoint on) but when it came to the musical and romantic elements, I didn’t see him faring too well. Unfortunately, I was right. “Arabian Nights” aside, the revamped songs in Aladdin just don’t entrance you like they do in the 1992 version. The biggest problem with the songs in the remake is that they lack the theatricality and effervescence of the original versions. “One Jump Ahead” and “Friend Like Me” are certainly choreographed well with  great practical and visual effects respectively, but they come without the emotion or playfulness that made the originals so entertaining. The worst offender by far though is “A Whole New World.” Like most aspects of this movie it’s fine, but “fine” is not the emotion I should be feeling. I should be swooning over the blossoming romance between Jasmine and Aladdin, not shrugging my shoulders and going, “meh.” Also, I know they’re going for realism with these remakes, but really, you’re going to have them sing “A Whole New World” and just have them fly around a lake? What about the rest of the world? You already feature a genie and a magic carpet, movie. Throw me a bone and let’s see some imagination please. Conversely, I did like Jasmine’s powerful new solo “Speechless,” written by Pasek and Paul, and the updated “Prince Ali.” Controversial opinion I know, but I’m not saying it was better that Robin Williams’ iconic version. For me, “Prince Ali” was the number that evoked all the charm and fun of the original, while still putting a unique spin on the classic tune.

It’s dawning on me that this review is probably one of the least insightful I’ve written. I just keep repeating, “it’s fine but it doesn’t compare to the original.” Sorry, but that’s my fair and honest perception of this movie. And those are the morals that Luke’s Living Room was built on. Also drinking. Oh! Turn this review into a drinking game where you take a shot every time I mention how the remake doesn’t compare to the original. It’ll be fun!

In addition to the music, it pains me to admit that the characters in the new Aladdin are hollow imitations of the originals. Mena Massoud makes a respectable Aladdin, but he doesn’t quite bring the diamond in the rough quality to the role that Scott Weigner did 27 years ago. Massoud frequently sounds like he’s simply reading his lines, leaving them absent of the charm and wit that we’ve come to associate with our favourite street rat. Massoud can’t be entirely to blame though for the lack of charm and wit. The dialogue in this movie repeatedly sounds as if a ninth grade drama class decided to put on Aladdin as their end of the year production. Naomi Scott’s Jasmine is in a similar boat. Scott conveys the determination and free-spiritedness that are necessary to play Jasmine, but overall there’s a sense of fire lacking from her performance. Instead of going, “YASSSS Jasmine!” I was left going, “you seem nice Jasmine.” Scott never really sold the character for me. Together Massoud and Scott share a decent amount of chemistry but again, not nearly as passionate or palpable as the original Aladdin and Jasmine. Drink! 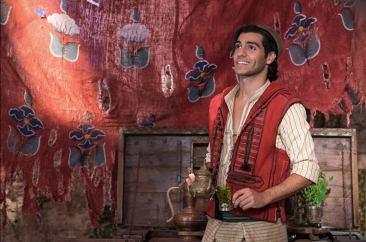 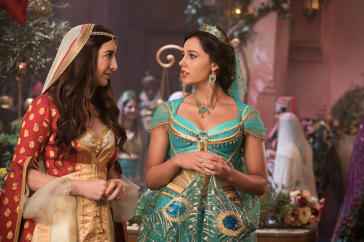 Of all the characters though, Jafar is definitely the one who suffers the most from the live-action remake treatment. I won’t mince words: He’s a downright disappointment. Absent of any true menace, intrigue, or delicious wickedness, Marwan Kenzari is simply not scary. Sure, following Jonathan Freeman’s hauntingly brilliant portrayal is a tall order to fill, but it’s like both the writers and Kenzari didn’t even try. The new Jafar comes off as a boring, bland, generic bad guy. The juvenile dialogue does little to help his character motivation. Oh! The MOST disappointing thing about Jafar though (besides not being nearly campy enough) comes near the movie’s climax. Which, by the way, is nowhere near as exciting or high-stakes as the original. No spoilers, but let’s just say that I haven’t been let down like this by a live-action Disney villain since the ending of Maleficent (2014). Thank God they were at least able to replicate the silent humour and lovableness of the magic carpet.

Well, we had to talk about it sooner or later: Will Smith as the Genie. Let me start by saying that I respect Smith’s bravery at attempting a role as laden with expectations as this one. If we’re being honest, there’s absolutely no one in the known universe who could play the part of the Genie with as much heart, energy, charm and humour as the incomparable Robin Williams. Smith clearly realized that because he seems to have made the wise decision to put his own fresh spin on the character rather than simply doing an imitation of Williams. The standout of the movie, Smith’s performance is certainly enjoyable and if Williams’ portrayal didn’t exist, it would be a laugh-riot. It’s still really fun and the character remains the rightful comedic relief of the movie, but…let’s say it all together! “It just doesn’t compare to the original.” 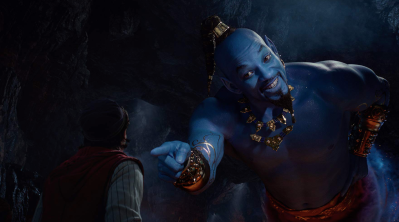 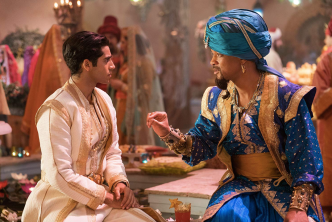 Ultimately, the live-action remake of Aladdin can best be compared to no-name chocolate chip cookies. It’s fine and we’ll all certainly eat it, but we’d much rather have Chips Ahoy. Y’know, the superior original version of the product?  If you’re a fan of Disney or the original I would still recommend seeing this movie. If nothing else, it’s a fantastic visual delight. Just don’t go into it expecting to be blown away by how great it is. Not even a genie could make that wish come true.

Will you see the new Aladdin? Are you a fan of the original?