An A+ in every way imaginable.

Last night I had the choice of going to see an early showing of the romantic-drama The Sun Is Also a Star (2019) for $13, or a later showing of the coming-of-age comedy Booksmart (2019) for $17. Though I was pretty tired, I’d been hearing nothing but praise for the latter and after watching both trailers once more, I ended up seeing Booksmart.

Boy, did I make the right choice.

Not only did I end up seeing what I think is the best movie of the year so far, but the audience was also treated to the film’s stars Beanie Feldstein and Kaitlyn Dever coming out before the movie to do a 20 minute introduction! I couldn’t believe it, I was so shocked! Normally this only happens at special screenings, and I just paid a regular admission! The two young stars were full of energy, charm and fun, a wonderful precursor to the movie. By the way, I filmed some of their introduction and you can check it out on my Instagram highlights, @lukeslivingroom.

Booksmart follows Molly and Amy, two long-time friends on their final day of high school. After having spent four years working hard to get into the colleges of their dreams, the friends realize they’ve missed out on four years of parties and teenage fun. Attempting to make the most of their time together before parting ways, the girls spend the eve of their graduation getting into a night of debauchery.

Wow, was I blown away by this movie. From the second that it started, a huge smile spread across my face and I don’t think it left for the next hour and 45 minutes. I credit that to the movie’s phenomenally-talented stars. As Molly and Amy respectively, Feldstein and Dever share an undeniable chemistry, one that feels like they’ve been real-life best friends for years. Their charisma and comedic timing are so on point and so magnetic, that you’ll spend half the movie laughing your head off and the other half hoping that it never ends. Sharing about 90 per cent of the movie’s scenes, Feldstein and Dever possess an incredibly effortless repartee that will have you falling in love with each of their characters and eagerly looking froward to whatever shenanigans the pair will get into next.

As a movie-goer and an aspiring writer, it’s the script more than anything that really makes me fall in love with a movie. Sharp, touching, charming and laugh-out-loud hilarious, Booksmart delivers a modern take on the teen-comedy genre that is sure to be remembered for years to come. Putting a fresh spin on the genre while still honouring the traditions of the trope, Booksmart is at its best when it is satirizing and finding the humour in teen culture. It really reminded me of acclaimed comedies like Clueless (1995) and Easy A (2010) in the way that it lampoons teen culture while also celebrating the wonderful comedic potential that lurks around every high school corner. In fact, not since Clueless has there been such an eclectic group of L.A. teens that I wanted to hang out with. Based on how effortlessly hilarious the entire movie is, I’m really curious how much of it was written and how much was improvised. Trust me, once you see this movie (please do!) you get the sense that there was tons of improvisation on set. How could there not be with such an amazing cast?

Appearing in supporting roles, Jason Sudeikis, Lisa Kudrow, Will Forte, Noah Galvin and Billie Lourd all receive ample screentime to leave lasting impressions. Each plays their part to perfection and beyond, igniting a war amongst the cast to see who can be the movie’s biggest scene-stealer. There certainly aren’t any weak links but my personal vote is a tie between Galvin and Lourd. As overly-theatrical drama student George and wild party girl Gigi respectively, Galvin and Lourd are fantastic. They commit to their characters so fully and with such passion, that I almost wanted them to be in scenes with Molly and Amy just so I could have the four best parts of this movie together all the time. Seriously you guys, this cast and this movie are just the best. I want all of them to star in every upcoming comedy movie. Especially Feldstein. Mark my words, she’s going to get a Golden Globe nomination for this movie. If she doesn’t I’d be shocked and may just have to riot in the streets. 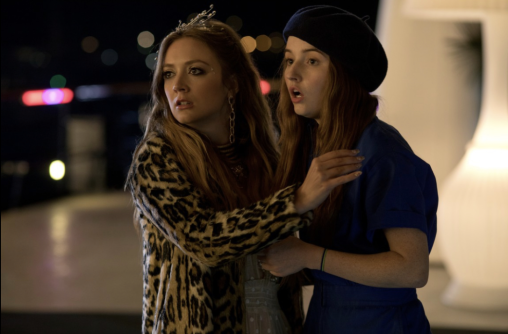 A stunning debut from first-time director Olivia Wilde, Booksmart is undoubtedly the best comedy of the year. Chaotically comedic as it is, the winning script is not without its emotional moments. Several times the movie sheds its comedic tone and delivers an emotional punch that will leave you wrecked. Don’t worry this definitely isn’t a dramatic movie, but it’s one that recognizes the inevitable drama that comes with being a high school senior and finds the entertaining realism in it. At its core, this is a story about friendship, youth and the time in our lives that makes us question the people we want to grow into. It’s a beautifully told story and could not have been handled more perfectly. Wilde has set the bar for every first-time director who comes after her, and I can’t wait to see what project she chooses next.

I can’t speak highly enough of this movie. I highly recommend gathering your closest friends and heading to theatres this weekend to see it. If any movie deserves to be seen in theatres, it’s this one. You know when you’re in a packed theatre watching a comedy and the already funny movie is made even funnier by the fact that everyone is having such a pure and joyful time? That’s Booksmart. Please go see it and have a great time!

Will you go see Booksmart this weekend?