Issa Rae is a rae of sunshine.

When I was 13, I spent my days going to Mac’s convenience store for coke slushies, playing Pokémon on my DS, and thinking of ways to get out of participating in my grade seven gym class. I was really good at it too. I pulled everything from “forgetting my gym clothes” to “slipping on the ice outside my house and bruising my leg.” Lord knows I wasn’t about to actually play basketball with everyone else. The point is, when I was 13 I was definitely not executive producing Hollywood movies like Marsai Martin, the young star of Little (2019). I wish I had been though. If I had been executive producing movies as thoroughly enjoyable as Little, I’d be a hollywood heavyweight by now. I blame my grade seven gym teacher, I really do.

Little follows Jordan Sanders, a ruthless and coldhearted tech mogul who treats everyone around her like dirt. When she ends up offending a little girl, Jordan wakes up one day to discover that she has magically transformed into a 13-year-old version of herself. With her overworked and ambitious assistant April by her side, Jordan learns what it means to be a better person, and see things through a different perspective.

When the trailer for this movie first dropped a few months ago, I was very impressed by it. I laughed throughout the entire three minute video, more so than I have for any other comedy in a long time, and immediately put it on my list of movies to see. Sure, it’s basically a reverse Big (1988), but 17 Again (2009) was a reverse 13 Going on 30 (2004) and look at how well that turned out! By the way, can you believe 17 Again recently turned 10 years old? Geez. Besides, Little boasts an an incredible cast that shakes up its familiar premise so let’s get into it.

Playing the adult Jordan Sanders is the fabulous Regina Hall, arguably the biggest reason why I wanted to see this movie. I love her. A charming actress who’s always down to clown, Hall is chewing all the scenery and it’s so damn entertaining to watch. I could watch her perform this domineering, abrasive, genius diva for hours. Channeling her inner Miranda Priestly, she dives headfirst into this over the top performance and the result is a character you’ll be unable to resist laughing at and with. God, she’s so damn talented. Martin, as the young Jordan is great as well, delivering a comedic performance with the execution of an actress twice her age. When watching Martin perform, at times I had to remind myself that she was a different actress, and not in fact the younger version of Regina Hall. She’s a talented young actress with a real knack for comedy. Pair that with her skill for producing, and Martin is set to become the Hollywood heavyweight I could never become. Again, I completely blame the elementary school physical education system. 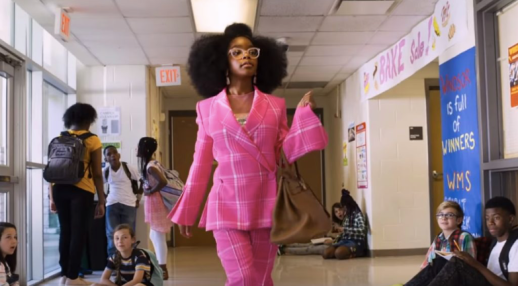 I’m definitely late to the Issa Rae game. Though I’m aware of her hit HBO series Insecure (2016 – present), the only work of hers I’ve seen is The Hate U Give (2018) which definitely isn’t a comedy, and her Essence cover, which is a damn work of art. By the way, you can check out my review for The Hate U Give here. Now that I’ve experienced the full might of Rae’s comedic prowess, I want her in every single upcoming comedy project. All of them. She has a romantic comedy with Kumail Nanjiani called The Lovebirds (2020) coming out and I’m very excited about that.

A testament to Rae’s talent is that she has a palpable chemistry with every actor she’s in a scene with. Her delivery is impeccable, her reactions are priceless, and the screenwriters deserve major credit for crafting a script that’s peppered with laugh out loud funny jokes, perfect for a comedian like Rae. Also, she has to do so little (ha) to get a laugh. She’s that naturally talented. As April, Rae pulls out all the stops and will ensure that you burst into laughter every time she appears on screen. Her and Hall’s characters are so well portrayed and so enthralling, that I’d be more than happy to watch their back and forth in future movies. Or a TV series!

Although the premise is certainly nothing revolutionary, the cast and the dialogue are so damn exceptional that it elevates the simple story. The script does a great job of getting a lot of mileage out of the premise, squeezing out every last drop of comedic potential. Also, any time a movie sets up its tone, characters, and story in the first few minutes by showing instead of telling the audience, it automatically gets a good review from me. The only thing that is a tad jarring about the script though is that it’s simultaneously a kids movie, and a movie for adults. It’ll go from adult-themed jokes one minute to Disney-Channel-level kiddie antics the next. These kiddie scenes go on for a touch too long and in fact, it’s their abundance that hinder the movie from being a perfect 10 / 10.

Ultimately though, Little is a highly enjoyable movie-going experience that will leave you with a smile on your face from start to finish. Genuinely hilarious and a great movie to share a barrel of laughs with friends, I strongly recommend this fun, goofy comedy.

Will you see Little?