Apparently Michigan is the worst place in the world.

Yesterday I posted my review of the abysmal romantic comedy, The Perfect Date (2019), which you can check out here. My reasoning for hating that movie so much was largely because it was devoid of any charm or originality. Feeling the need to cleanse my rom-com palette, I scoured Netflix for a rom-com that I knew had personality to spare. I finally settled on The Five-Year Engagement (2012) which ironically enough, I haven’t seen in probably about five years. I remember it being a breathe of fresh air that more than delivered on both the romance and comedy fronts, as well as featuring A TON of famous faces popping up here and there. We’re talking appearances from Star-Lord, Xenophilius Lovegood, and even Anastasia Steele. This movie has it all.

The Five-Year Engagement follows Tom and Violet, a recently engaged couple who are madly in love. Though they plan on marrying quickly, their nuptials continuously get put on hold due to forces outside of their control. A sister’s pregnancy, an incredible job opportunity, and an unhappy move to Michigan all take their toll on Tom and Violet, as they begin to question if getting married is something the two of them even still want. Can they handle all of the obstacles life throws their way and still get their happy ending?

I’m just going to dive right in: I would have been okay if Jason Segel weren’t in this movie. I realize that as Tom and one half of the engaged couple his character is necessary for the story, but Segel gives me absolutely nothing. I’ve honestly never been a big fan of his and controversial opinion, but I can’t stand How I Met Your Mother (2005 – 2014). Throughout The Five-Year Engagement Segel manages to muster up a few laughs here and there, but most of the time he comes off bored and half-awake. It’s almost like he’s phoning in this performance and doing the bare minimum of what is required for a rom-com lead. I don’t mean to put Segel down too much because he truly isn’t awful, but when you’re acting alongside the sensational Emily Blunt, you need to bring it.

My God, Emily Blunt can do no wrong. She’s literally starred in every genre of movie from musical, to thriller, to action, to fantasy, and she positively shines in any given role. A natural talent who makes any role look effortless, Blunt is giving me everything as Violet. You can tell that comedy comes easily to her, and while I think she’s a fantastic dramatic actress, it’s in lighter roles such as this that I think make me fall more in love with her. With a sense of comedic timing you could set a watch to, every expression, line, and movement of Blunt’s is that of an experienced comedienne. All she has to do is use that hypnotic accent to drily deliver a snarky remark or do an impression of Cookie Monster discussing having kids, and I’m laughing my head off. I don’t think Blunt has done a straightforward comedy since this, and I can’t wait to see her in another one soon. 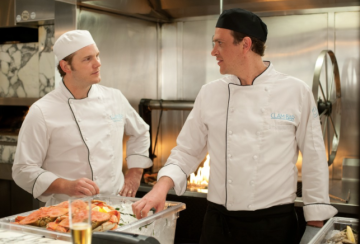 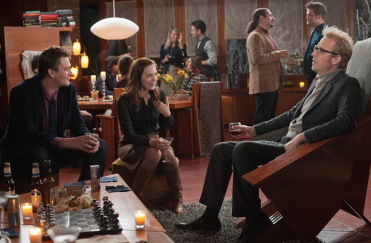 As fantastic as Blunt is, it’s Alison Brie and Chris Pratt who wind up stealing the show. As Violet’s sister Suzie and Tom’s best friend Alex respectively, this dynamic duo create two characters who light up every scene they’re in. Delightfully dimwitted and wonderfully wacky, I would even go as far to say that I greatly preferred the presence of these two side characters than I did of any of Segel’s screen time. Okay, I’m sorry to rag on Segel like this, but facts are facts people. He was surrounded by an extraordinarily talented comedic cast and simply didn’t rise to the occasion. It’s also extremely difficult to compete with the combined charisma of Chris Pratt and Alison Brie. It’s so powerful, I was able to ignore the alarmingly absurd English accent that Brie adopts to play Blunt’s sister. If those two didn’t look and act like the perfect pair of sisters I’d probably have a bigger problem with it but what can I say? The effervescent charm of Alison Brie is that powerful.

Speaking of charming actors, The Five-Year Engagement is in no short supply. Overflowing with notably names, the movie boasts cameos and supporting roles from the likes of Molly Shannon, Rhys Ifans, Dakota Johnson, Kevin Hart, Randall Park, Jacki Weaver, Kumail Nanjiani, Mindy Kaling, and Chris Parnell. Wow, quite the impressive lineup of current and up-and-coming talent! God, could you imagine how much fun this movie must have been fun to make? With all of that comedic talent under the supervision of director Nicholas Stoller, the man behind Forgetting Sarah Marshall (2008) and Neighbors (2014), I can only imagine the amount of improv and shenanigans that went on behind the scenes. In fact, the movie as a whole kind of reminds me of a collection of Saturday Night Live (1975 – present) sketches in the best way possible. I mean, except for the constant postponing of the wedding there isn’t really a plot, which allows more time for this cast of kooky characters to do their damnedest to make you laugh. Boy, do they succeed. Don’t you just love when multiple actors you like appear in the same movie? It’s like, the movie already had me sold with Blunt and Brie, but then you add in Pratt and Kaling? I would like to thank not only movie Jesus, but movie God for these great blessings.

The Five-Year Engagement may be a bold and daring romantic comedy that isn’t afraid to smash the box its genre automatically places it in, but that doesn’t mean it isn’t without its problems. For starters, at just over two hours, it’s about 20 to 30 minutes too long. There’s a lot that could have been left on the editing room floor. Like the dated racial jokes and backwards ideas of male and female roles for instance. Those cringe-worthy scenes are probably what stopped me from flat-out loving this movie, and instead only really liking the parts of this movie that deliver genuine heart and humour. Still in love with the absolutely super adorable and dreamy romantic ending though.

Overall, I would recommend The Five-Year Engagement if you’re looking to add something new to your rom-com repertoire. It’s on Netflix so how much could it really cost you? It’s certainly better than deciding to stream The Perfect Date. Ooh, I just gave myself chills thinking about that movie again. And not the good kind of chills. Finally, let me leave you with an interesting observation that I made during this viewing: in a weird twisted way, this movie is a reverse Four Weddings and a Funeral (1994). It contains one wedding and four funerals. Huh. Weird, right?