We need to talk about the elephant in the room. Literally.

There’s nothing like standing behind a family with little kids in line for concessions to convince me not to have children. The screaming, the arguing, the insistence that a small popcorn isn’t enough food for them, the crying because they didn’t get the toy they want…not my idea of a pleasant trip to the movies. Oh, and then I ended up sitting near this family in the theatre! Let me tell you, not only did the kids have the bags of popcorn and drinks they already bought, but then the dad comes in with a tray full of hot dogs and fries! I fully support pigging out at the movies, but my frugal heart was in pain thinking of how much this poor family spent on admission and food. I’m still salty that I paid $8 for a bottle of water and a small bag of peanut M&Ms. Wait, what is this review about again? Right, Dumbo (2019).

The first of Disney’s four live-action remakes being released this year, Dumbo is based on the 1941 animated feature of the same name. Struggling to keep his failing circus together, ringmaster Max Medici acquires an elephant for a new attraction, and hires war veteran Holt Farrier to take care of her. When she gives birth to a baby elephant with enormous ears, Holt’s children Milly and Joe bond with baby Dumbo and learn that the titular elephant has the amazing ability to fly.

Before going into the theatre, I had no idea what to expect from this recent offering from the world of remakes. Would it be shot-for-shot perfection like Cinderella (2015)? Or would it deviate from the source material like The Jungle Book (2016)? Regardless, I’m a big fan of director Tim Burton, his last Disney project, Alice in Wonderland (2010), as well as his frequent collaborators Danny DeVito and Michael Keaton. So while the idea of yet another Disney live-action remake exhausted me, I remained optimistic that the team involved would deliver a show worthy of the centre ring. Turns out, though Dumbo was more than capable of taking flight, it never managed to truly soar.

There’s a lot to like about Dumbo. The story has more depth and emotional weight than the original film, the production design is exquisite, and Dumbo himself is beyond adorable. Seriously, there was an audible “awww” from the packed theatre when he first appeared.

However, despite the visual spectacle that Burton conjures up, this just didn’t feel like a Tim Burton movie. It’s almost like Disney neutered him. The majesty and imagination that you come to expect from one of his films is certainly there, but none of the director’s trademark ghastly tone. What can I say? I wanted a little more spookiness. And a lot less CGI. Holy Hell was there an overuse of CGI in this movie. My hand to God, the first scene less than twenty seconds into the movie is so over-saturated in graphics that I thought I was looking at a screensaver.

Outside the joy and childlike wonder of watching Dumbo fly, by far the most enjoyable part of this movie is Danny DeVito as Max Medici. Danny DeVito is a lot like Dolly Parton. Stay with me. Many of DeVito’s movie roles are simply DeVito being his brassy, short-tempered, lovable self, much like how all of Dolly’s roles are her playing her sweet, whimsical, lovable self. Side note, I freaking love Dolly Parton. As expected, DeVito plays himself to the max (hah!) and as expected, it’s nothing short of a delight to watch. His effervescent charm and endearing grouchiness just spills into every role he plays and I can’t get enough of it. You can really tell that he’s trying his damnedest to pump some heart into this, at times, bland remake. Bless his heart.

So, Michael Keaton is also in this movie, and I’m like 91 per cent sure he thought this remake was going to be an animated one. You guys, I LOVE Michael Keaton but wow, was he miscast. As the villainous V.A. Vandevere (that’s fun to say) Keaton misses the mark with a performance that’s at a nine when everyone else is at a six. He was just so over the top campy and theatrical and while I’m normally totally on board with that, this was not that type of movie at all. It’s almost like Keaton, who is so skilled at making each of his roles feel like real people, missed the mark because he was trying too hard to BE a character, y’know? It truly pains me to have to come to this realization, but Michael Keaton was probably the worst part of this movie. I’m going to Hell for saying that. No, wait, his horrible wig was the worst part of this movie. I have not seen a hairpiece that obvious and terrible since Amber Heard in Aquaman (2018). By the way, you can check out my review for that movie here. 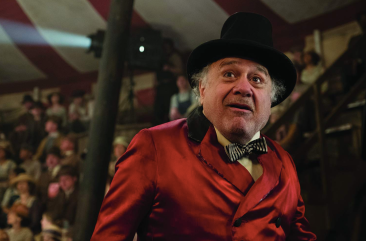 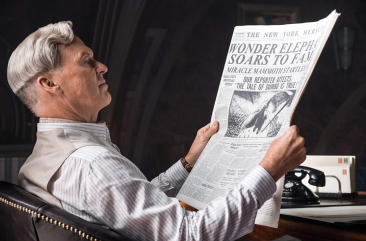 Like Burton’s Alice in Wonderland, Dumbo thrives by ensuring that it hits all the high notes of the original story while adding in a generous amount of new details to keep audiences on their toes. That being said, there wasn’t a second where I didn’t know exactly where this movie was going to go and you know what, I’m perfectly fine with that. If you’re going to see Dumbo, you want to see the story about the little elephant learning to find the courage within himself to use his gifts and show the world that they were wrong for making fun of him. That’s exactly what Burton and Co. deliver and for the most part, it goes off without a hitch. The delicate new rendition of “Baby Mine” coupled with the heartbreaking image of Dumbo holding onto his mother will shatter your soul and have you reaching for the tissues. Towards the end the story does drag on a bit and honestly, I was ready for it to end. Alan Arkin surprisingly shows up though so once again, I was happily entertained.

If you’re a fan of the original, Disney, or just need to distract some children for a couple hours, Dumbo is a safe bet. It’s definitely not the best of the Disney remakes but it’s certainly not the worst, and the human actors turn in solid performances even if their characters were completely one-dimensional and occasionally unintentionally hilarious. Oh my God, when we first meet Michael Keaton’s character, literally his first line is, “cancel my dinner with the president. I have business with an elephant.”

I LAUGHED SO HARD AND I WAS THE ONLY ONE.

Will you fly to theatres to see Dumbo? Are you a fan of the original?