It was a frighteningly gorgeous piece of art in every sense of the term.

Get Out was one of my top three favourite movies of 2017. For interest’s sake, Girls Trip (2017) and Wonder Woman (2017) were the other two. Jordan Peele’s directorial debut was so extraordinarily written, masterfully acted, and genuinely terrifying, that I’ve basically spent the past two years in anticipation for whatever nightmare he would cook up next. Well, that new nightmare is here and quite literally, it’s Us (2019). Based on my experience of seeing Get Out, I knew that seeing Us was going to be a roller-coaster side of emotions. What I wasn’t expecting though was one of the most unsettling and frightening experiences I’ve ever had in a movie theatre. You guys, my friend next to me was already squirming and going, “oh God, no,” during the opening credits.

Us tells the story of Adelaide Wilson who as a young girl, experienced a traumatic and frightening event inside the hall of mirrors at the Santa Cruz boardwalk. 30 years later in the present day, Adelaide and her family unexpectedly travel back to Santa Cruz for a weekend getaway. Already rightfully uneasy, Adelaide’s fear is heightened when a mysterious group of strangers begins to terrorize the Wilson family. Scariest of all, the group looks identical to each member of Adelaide’s own family.

Jordan Peele is a force to be reckoned with. A true original whose narrative prowess is a breathe of fresh air in a world of remakes and superheroes, Peele’s second feature is just as well crafted as his first. What I admire most about Peele besides his impeccable script writing, is the amount of research he puts into his work. Us is a wholly original film, but you can pick up on the subtle references he makes to the classic horror flicks that inspired it, such as The Birds (1963), The Shining (1980), and Night of the Living Dead (1968). These references help set the tone for Us, which is a winning combination of mind-bending thriller, and good ol’ fashioned monster movie. Seriously, less than 10 minutes in and I was on the edge of my seat and in very real danger of wetting myself out of fright. Being familiar with Get Out and knowing how easily Peele can evoke terror and foreboding out of the simplest of scenarios, I was on pins and needles just watching a little girl descend a flight of stairs. Us will reignite your fear of the dark.

Though the movie’s horror is strengthened by a constant sense of paranoia, there is actually a lot of humour to be found in Us, believe it or not. Not that surprising given Peele’s comedic background. Winston Duke, who plays Adelaide’s husband Gabe, is the movie’s main source of comedic relief and wow, is he great. Truly, his comedic moments relieve you from the sense of dread that comes from watching Us. An abundance of charisma and a magnetic personality make Duke a delight to watch, a fact audiences learned from his performance as M’Baku in Black Panther (2018), and elaborated on in Us. Duke not only plays the part of of stereotypical dad to utter perfection, but establishes himself as a formidable action hero as well. Watching him beat the crap out of evil doppelgängers got some of the biggest reactions from the vocal audience, and I think I speak for everyone when I say that I look forward to seeing him in more leading roles in 2019.

Speaking of audiences, definitely go see this movie in a packed theatre. Again, not since Get Out have I felt a true sense of terror amongst an audience. Each new twist, moment of tension, and horrifying revelation was so well delivered and packed such a punch, that the audience, myself included, was unable to keep their reactions to themselves. We were civil for a while, but as soon as the family of doppelgängers appeared, the entire theatre was shrieking and yelling at the screen. Girl…WE. WERE. GOING. THROUGH. IT. The amount of times we yelled, “Lupita, NOO!” or “OH MY GOD!” was more than I can count, but only added to the fun of seeing this brilliant masterpiece on the big screen. I imagine this is what it must have been like in the 50s and 60s going to see a new Hitchcock movie for the first time. Us is undoubtedly a modern horror classic.

A big part of what will allow Us to stand the test of time is Lupita Nyong’o’s jaw-dropping performance as Adelaide. Nyong’o captures the frantic paranoia and distress of Adelaide as she’s forced to return to a place that scarred her forever, and then as the movie thrusts the Wilsons into peril, she flawlessly transitions into a horror heroine for the ages. I could watch her beat the hell out of evil clones over and over again. It’s an incredible feat for an entire cast to play both predator and prey, and I’ll be damned if  Lupita doesn’t deserve to be nominated for some type of award for her chilling dual performance as Red, Adelaide’s doppelgänger. My hand to God, sometimes I had to remind myself that I wasn’t watching two different actresses, and just one sensational Oscar-winner. Her performance left me spellbound and I was unable to turn away from the horrors unfolding before my eyes no matter how desperately I wish I could.

Sleek camera angles and vibrant pops of colour bolster Us, ensuring that watching Peele’s movie is almost like watching a piece of art that just draws you in. However, if there is one small problem with this work of art, it’s the ending. The finale of Us is by no means unsatisfying or bad, but it’s a confusing one that is going to require a second viewing to properly decipher just what the hell happened. There was a lot of exposition that gave us a lot of information in a short amount of time. My friends and I spent a solid 15 minutes outside the auditorium doors attempting to piece together what the ending means. Hey, movies could be a lot worse than an ambiguous ending and trying to figure it out may just be half the fun of seeing Us. 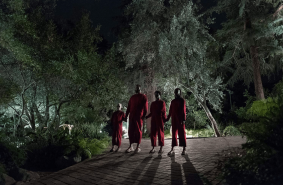 With Us, Peele has solidified himself as one of modern cinema’s masters of horror, and his films as must-see events. If you’re a fan of Peele, horror, or just exceptionally made movies, than you absolutely have to see Us. Through character design, speech, and movement, Peele delivers a horror film that thrives on subtlety even though his skill as a filmmaker is anything but.

Will you be seeing Us? if you’ve already seen it, what did you think?